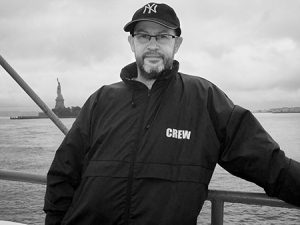 began his career in 1992. He worked for the Atelier Alfred, where under the direction of Gérald Frydman, he learned “on the job” several trades of cinema: 1st assistant director, editor, stage manager, director. After 3 years of experience on television movies, commercials, feature films and short films, he met Olivier Rausin, who at the time was production director and producer at Artémis productions and who took him with him as location and unit manager On several of his projects

After more than forty films as unit and location manager, he has been production manager and executive producer at Climax Films since 2012, while also working for Scope Pictures, A Private View, Umedia and Savage Film.

In 2004, he made his first short film “Zartmo”, selected and rewarded in several national and international festivals.

In 2015, he created “Non Peut-Etre Productions”, with the aim of starting to produce television and cinematographic works, while continuing to work assiduously as Production Director.